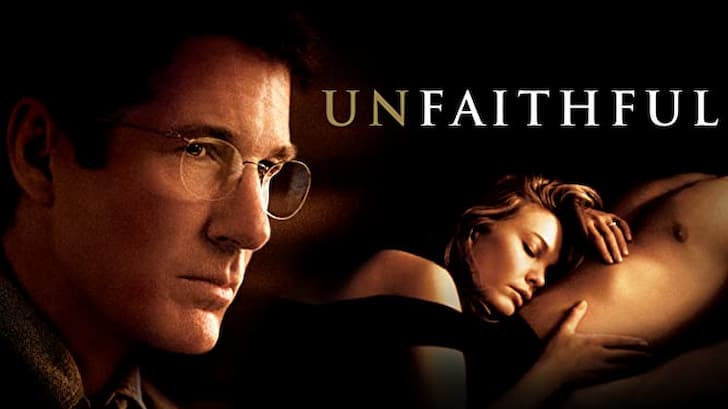 Lust, obsession and rage can transform a person into a monster. Unfaithful is one of the thrillers wheeled by lust and obsession. It emphasizes on the fact why many marriages fail these days and it takes a realistic approach with how the characters respond to betrayal.

Unfaithful as the name tells is a tale of betrayal. A loving husband trusts his wife blindly. However, the wife maintains her obsessive relationship of pleasure and gratification with a second man. As her affair comes to light, so does the hidden anguish of the husband resulting in him facing sides of him he never imagined he had.

If you enjoy a thrilling romance with a touch of crime and obsession like Unfaithful, below are some recommendations for you.

Swap the position of main characters and you will have Unfaithful. Again a tale of betrayal, an extra marital affair and anguish destroys the relationship followed by torture and murder.

Unlike Unfaithful, the husband has a younger lover who he dots over. The sober wife gets wind of his infidelity. But she takes it only on the young girl who may not have known the whole truth. The frustrating story of torture, fear and obsession kicks in with betrayal.

Falling in love is easy but staying in love is what takes courage and understanding. Killing me softly is a different yet similar story to unfaithful only in a sense that the truth takes its time to wreak havoc in the lives of a passionate couple.

Alice falls for the charm and beauty of Adam. Without knowing his popularity she marries him and the two indulge in gratification. However, Alice’s curiosity is fired up by the constant warning of not trusting Adam. Can she stay in love with the man she knows nothing about?

With everything as clear as water, Indecent Proposal is an open betrayal that one opts to commit by declaring it. The ups and downs in the life of a happily married couple take them to the peaks of agony and helplessness.

David and Diana face a severe financial problem. However, the loving couple is determined to solve the problem in the city of sins, Las Vegas. One offer to spend a night for $1million lures Diana and she decides to betray her husband when he clearly says that it won’t be worth it for money.

The meaning of thriller is defined by the very chilling and dramatic love movie Fatal Attraction. The film became hugely popular by scoring some extra millions and becoming the highest grosser of the year. Dan, a lawyer, is enjoying the peak of his life with a beautiful wife and a daughter.

He has money and status that keeps on rising. He ends up in a steamy fling with Alex, a book editor. For Alex this fling is more serious than it seems. Her obsession and envy targets Dan’s family with murderous intents. Now, Dan is more concerned about keeping his family safe instead of hiding his affair.

As the name suggests, the movie showcases an affair that is one of the common reasons for a failing relationship. Not being satisfied with what they have, people tend to seek comfort and satisfy their need from unusual means.

An Affair brings to light one such illicit relationship of Anita. She switched her jobs and now works as a teacher in a school. Her boring married life turns upside down when she discovers a 16-year-old student obsessing over her. Lured by lust, the two cross the boundary that turns their relationship to an immoral one.

More similar thrillers with passionate romance and affairs on the peak like Unfaithful: