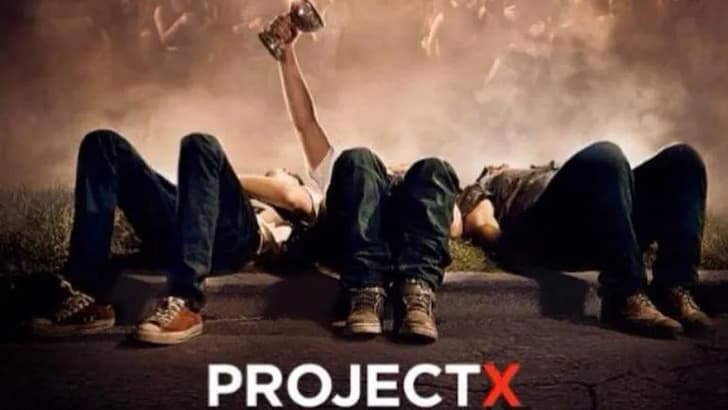 Teens are unpredictable, outrageous, sensitive, and sometimes dangerous; that is how they graduate from the time that leaves a noticeable impact on their lives. Based on the actual events of one such outrageous and unpredictable teen Project X became a hit in no time.

The plot surrounds Thomas, Costa, and JB. These three friends are literally invisible to their world. To graduate from this anonymous life, they hatch a plan. What could be better than a dazzling and humongous party? Well, with just one single invitation on a website, a number of people show up at their doorstep. The results, however, are definitely not what the trio expected.

If you enjoyed the fun-packed, exciting friendship in Project X, then below are some recommendations for you.

Not only teenage, but the threshold to enter the twenties is also a dangerous one. No matter how careful you are, even the flapping of a butterfly’s wing can change a lot. Like the trio of Project X, 21 & Over introduces a rowdy trio.

The honor student and always obedient Jeff is about to mess up his big day. Not marriage, not anything but his medical college entrance exam. When his two childhood besties drop at his house to surprise him on his birthday, a few drinks does the deed and brings the dark clouds that ramble and say 21 & it is over already.

Superbad is Project X with a bit of twist and turns. Instead of a crazy trio, Superbad displays the friendship of Seth and Evan. The fun element, thrill, and unexpected twists are a mirror image of Project X.

The movie begins with Seth and Evan as they desperately try to get the label of "Virgins" off them. Their not-so-perfect plan gets under when the cops enter their lives. If that wasn't enough, their plan also gets busted. Can they succeed?

The Sitter movie follows in the footsteps of Project X with some added fun and a little twist here and there. David Gordon's flawless piece took babysitting to the next level. It relates to real-life scenarios well.

Noah Griffith, the college dropout, is about to lose everything. However, one unexpected job takes him on a journey to New York. His silly wish to experience love at once turns the babysitting thing into an adventure no less dangerous and hilarious.

Bending the conventions and bringing out a heroic comedy and a funny thriller, 21 Jump Street is among the highest-grossers of high school comedies. Returning to the era of their not-so-bright college life, two fresh officers take a dangerous path.

Schmidt and Jenko opt to go undercover as college students to uncover the tracks and works of a drug ring. However, when they trade their guns for drugs only to act like addicted students, who will believe they are cops? Things will only get funnier and more dangerous for them.

This one isn't a college or teen comedy. However, based on the same demographics, The Change-Up is undoubtedly a perfect, dangerous, fun-packed film with a touch of fantasy. The best buddies Dave and Mitch reunite after years, and each cries out about their complicated lives.

Each envies the other, and they end up switching bodies with a stroke of luck. At first, they were all happy. However, things turn different as soon as their lives progress. It becomes more evident if it is luck or bad luck.