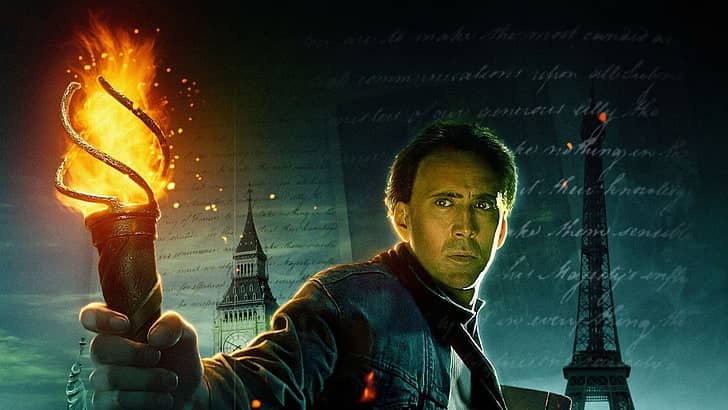 Treasure Hunt has always been one of the most electrifying and rip-roaring games. Using the basic idea of a treasure hunt Jon Turteltaub brought a classic and entertaining adventure to light. The spectacular cast did a splendid job in making this adventurous movie memorable.

Ben Gates, played by Nicholas Cage, is obsessed with treasure hunts both in real life and in the movie. As a Historian, Ben fantasizes about discovering the secrets of the beginning of his beloved country. When he is bestowed the chance to discover the truth, he is betrayed by his fellow on this treasure hunt. The thrilling adventure becomes a chase to keep the secrets of history in safer hands.

If you enjoyed the exciting adventures in National Treasure, then below would be to your taste;

Lara Croft is a quintessential movie that gained popularity from its game. Fully packed with hair-raising adventures, actions, and surely treasure hunt made this one a record-breaking movie adaptation of a game.

Similar to the game, the movie also follows the young aristocratic lady Lara Croft with a huge fortune under her feet. Lara decides to venture along when the world is threatened with destruction and evil minds. Her dangerous adventures unveil secrets that she was oblivious to.

Like National Treasure, The Mummy is also a thrilling adventure, except that it is followed by the horrors of ancient evil entities. For decades The Mummy franchise has been keeping audiences spellbound. The same is the scenario of The Mummy, 2017, led by Tom Cruise.

Nick Morton, albeit a soldier, is a sucker for ancient relics. Selling them on the black market is what he lives for. During an eventful day, lusting for unpriced relics, he frees the ancient evil princess Ahmanet, and the death chase begins.

Sahara follows in the footsteps of National Treasure with just a bit of a difference. Dirk Pitt, played by Mathew McConaughey, does justice to his role as an adventurer.

Dirk is in search of a lost ship that holds billions of treasures. He embarks on the treasure hunt and confronts a beautiful scientist Eva. His treasure-hunting adventure becomes a deadly one when Dirk accompanies Eva to stop an epidemic from happening.

This one is the most similar movie to National Treasure. It walks the same path. However, the plot does not focus on a treasure hunt; instead, it’s a life and death battle of proving someone’s innocence.

Ben Gates embarks on a journey to France with his wife and friends in search of concrete proof. He has to clear his ancestor’s name off the assassination of Lincoln Abraham.

It is one of the most exhilarating old treasure hunt movies. This Crusade took the viewers to a new world where tempting adventures await. The series made history with its exceptional and detailed connection to history.

The historical adventure strictly follows Indiana Jones, an explorer by occupation. Jones expedites to find his missing father with no hopes whosoever. Unbeknownst to him, his journey led him to one of the biggest treasures, the Holy Grail. However, the sacred treasure has many searching for it, some with lust and some for research.

More Films To Watch If You Loved National Treasure (2004):