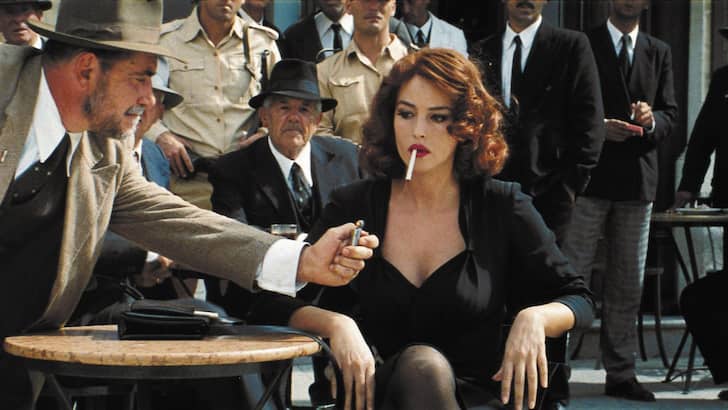 A beautifully assembled paragon of a sizzling beauty and her uncountable admirers, when all she wants for herself is peace and respect. Malena is an emotional piece with a profound message of how beauty is often anticipated and how women are forced to a single path.

Sulfaro Giuseppe did a splendid job in bringing a curious and love-struck kid in his adolescence on screen. The young boy Renato, unaware of anything, falls for the alluring beauty of Malena. As Malena suffers from her unwanted fate, Renato falls deeper into a world of his desires as his raging emotions surface.

The story is a mild mixture of drama and tragedy but is a masterpiece in many aspects. If Malena had you captive with her beauty and captivating story, then below are some picks for you.

Following Malena from the war times, The Lover strikes in with a flipped plot. The extraordinary performance of the cast and the burning chemistry between the two leads made the movie a worthy watch.

The tale unfolds with a poor teenager as she falls for a handsome and wealthy Chinese noble. What started as mere attraction becomes an immoral relationship as the duo gives into their desires. However, with things going against the accords, their illicit relationship is bound to face trials. Will it last till the end?

Love is a natural phenomenon as per se. However, if it begins against conventions, it is bound to have an unfortunate result. From Malena to Viola in All things Fair, things didn't change much. Except that what was just a fantasy for Renato became a reality for the 15- year-old Stig.

This drama and romance-driven tale express the emotions and desires of Viola, a biology teacher. She suffers from her burdening marriage and drunken husband. However, with the love-struck Stig, she feels at ease. Their forbidden relation only brings troubles for both as they indulge in gratification.

Based on Malena's demographics, Original Sin is another tale of tragedy, love, lust, and sins. If a man were to give in to desires, be them moral or immoral, things turn dangerous as the obsessions begin to overshadow the existence of a conscience.

Original Sin unveils the story of the impenetrable newly married Julia and her ever so lonely husband, Luis. As Luis falls for the mystifying Julia, he becomes obsessed with her. The burning love between the two leads to a darker path where right and wrong remain no more.

Prime is considered the twisted outcome of what could have happened if Malena and Renato were to end up together. It is another perfectly crafted gem that highlights the insecurities of a couple with age differences.

In her late thirties, at the peak of her success, Rafi finds herself falling for a young artist named David. Love blossoms between them, but the age gap of 14 years incurs some self-doubt in Rafi. Things turn thrilling when her therapist Lisa enters their life as David's mother. Can their love find a way?

Yet another drama-driven romance that takes desires and conscience to their peak. Who is Knocking at My Door is a unique combination of love, passion, cult, and tragedy.

When the ever-so-savvy and confident J.R; an Italian young man, falls for a girl on the streets of New York, his life flips. Just when he is about to enjoy the perks of being in love, he is faced with a dilemma. He contemplates accepting the tragic past of his lover. Of all times, his cult kicks in, and things become harder on him.

More films about relationship between older women with a younger man like Malena (2000):