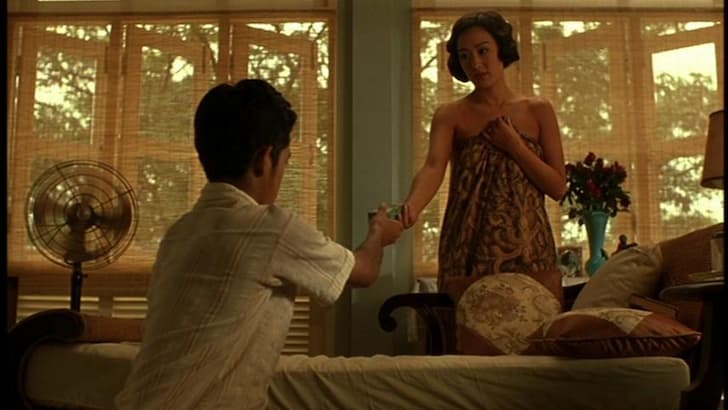 The right to choose a path for one’s self is often driven by the kind of life a person lives. To put it simply the happenings, environs and circumstances in a person’s life push them to make a choice they never want to. Director Nonzee Nimibuter did a phenomenal job portraying a scenario where giving in to pleasure and desire becomes the only choice regardless of the consequences.

It is the tale of a child born out of wedlock. Jan Dara, his depression and aggression towards himself and the world take a diverted path. Seeing his father’s roguish and immoral habits Jan picks the same way. If that wasn’t enough, his father’s mistress takes the lead and awakens his dormant lust leading him to a path that goes downhill.

If you are looking for enticing stories similar to Jan Dara with a bit of drama, then below are some similar picks for you;

Jan Dara is about immoral relations and how lust drives people and shapes their desires. Damaged movie also follows a similar plot. Unlike an innocent Jan, the story entangles mature individuals who clearly know the difference between right and wrong.

A famous and sturdy politician Stephen is known for his upright character. His stable marriage is threatened when his passion for his son’s fiancée becomes limitless. Left with no choice, he opts to give in to his desires yet desperately tries to not break apart the lives of the ones he cherishes.

Jan Dara is a tale of a boy who was shown only one path that is forever of pleasure but immoral. Following that, The House Boy is a plot that brings in Ricky. He is a teenager who chooses to escape depression using an immoral and illicit path.

Ricky, a young boy, struggles with his daily life where gloom crawls upon him. His brain hatches a lustful plan when offered to be the caretaker on Christmas for a gay couple’s house. The trio indulges in pleasure but unlawfully.

Restrictions at the right time and knowledge at the wrong time often result in conflict. Such is the story of Bilitis, similar yet different from Jan Dara. A young and spunky girl gets to witness an intimate time with a couple in love.

Her summer vacation became filled with curiosity about the enticing incident. To fire up her emotions and feelings, her summer break leads to a fateful encounter with ever-so-charming Melissa. Can she figure out where her choices will lead her?

Persuasion is nothing like Jana Dara, yet the only common thing is the sizzling romance that stirs quite some emotions. Persuasion is as its name suggests. The push and pull between giving in, moving forward, and choosing to forget or dive into pleasure are clearly screaming here.

The pure and passionate Anne becomes heartbroken when her first love moves out of her life one day. However, years later, when she decides to move forward and take the second chance, the ever-so-handsome fiancé returns to her life to stir her emotions. Will she be persuaded?

Twisting the story of Jana Dara with somewhat alike characters would be manifested into Rambling Rose. The early period was indeed the one where one won’t cater to their own treatment of others unless it confronts them.

The movie begins with Rose, who chooses to work under a notable household instead of selling herself immorally. However, her affection without cause to the younger Buddy leads him astray. Simultaneously her deliberate efforts to win the attention of the house lord become fruitful, leading to a sinful relationship.