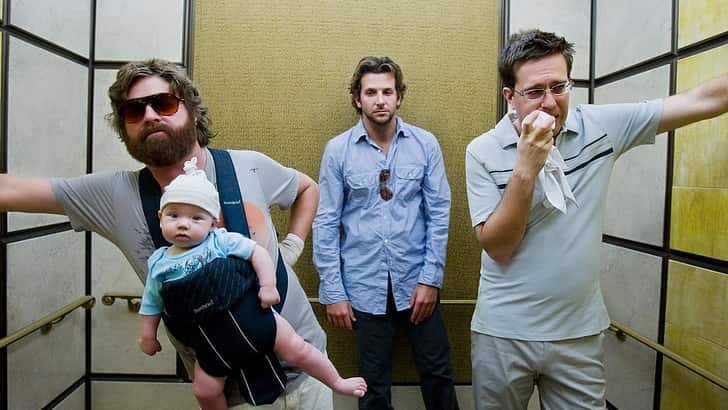 A movie that makes you laugh till you cry is a rare event. However, with an exceptional cast and engaging comedy, The Hangover is said to be one of the best comedies by Todd Philips. It showcases a deep friendship and how true friends always end up together.

The extraordinary laughing period begins with Doug’s wedding preparations. His three friends plan a trip with him to go wild before his wedding. However, after drinking and passing out, what happens is that Doug goes missing.

After some fights, miscommunication, blame games, laughter, and friendship, things settle down between friends. After all, isn’t that what a true friendship is? Some similar recommendations like The Hangover are as follows.

Set on the exact demographics of The Hangover, Horrible Bosses is one hell of a comedy, along with mind games and crime. The movie is an inspiration for some and a lesson for the rest.

The comedy-driven crime begins with three coworkers with a single goal; Take revenge on their Horrible Bosses. The trio hatches a plan after a drinking party. However, unbeknownst to them, a perfect plan requires calm and thinking. Unfortunately, they lack both. So will they ever succeed?

To what extent will your best friend go for your happiness? Like Doug’s friends from Hangover, Bridesmaids is also an energetic tale of laughter and friendship of lifelong friends.

The extremely fun-filled movie begins with Annie, a struggling woman. However, when her dearest friend is about to go through her big day, Annie leaves behind her troubling life. To stand as a perfect bridesmaid, Annie is up for all challenges, whether money or anything.

Moving a step ahead of the bachelorette life comes married life. Seemingly perfect, but it always has its hitches and glitches. Bad Moms is a little about how things are after marriage and how they affect people.

The frustrated comedy begins with the perfect life of Amy. However, the daily routine and daily responsibilities push her to the limits. The haughty trio goes wild with two other friends facing the same conditions. However, they soon find a competition one they don’t wanna lose to.

If The Hangover friends grow old together, they will be Last Vegas. Friendship in younger days is always different and vulnerable. However, in the aging period, things are different in many ways. Last Vegas focuses on that specific period of four friends.

Senior friends Billy, Sam, Paddy, and Archie, come together to celebrate Billy’s big day. They decide to go wild in Las Vegas after years. However, these old fellas in the continuously updated city of sins find themselves at odds. Will their friendship survive the odd trials here?

Step Brothers is The Hangover, except it is about two stepbrothers instead of some close friends. However, the comedy is theatrical, laughable, and a bit emotional. The drama-filled comedy begins when Huff and Dale, two lazy and useless grownups, meet face to face.

They are used to their lazy life of living off their parent’s money and home. But their rowdy behavior and sarcasm create a rift in the family. The duo decides to use their dull brains to bring the family back together using everything at their disposal.