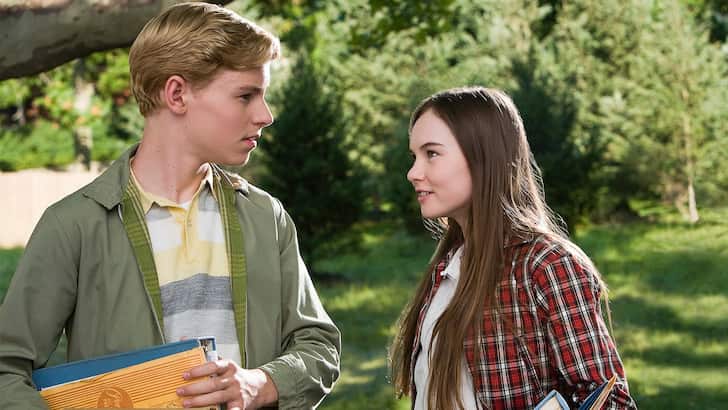 A phenomenon that can only be felt instead of explained with words is referred to as love. And hardly is it that one does not exaggerate a love tale. Thanks to director Rob Reiner for the perfect dose of innocent love, laughter, and a little drama to bind the excitement of a romantic evening.

Flipped is one golden movie that outshines others under the tag of love. It revolves around the young, very young Juli and Bryce. They unintentionally play a game of push and pull in love. Juli falls for Bryce in the first meeting and pursues him for years.

However, Bryce doesn't take things seriously. Yet, things flipped, and the two found each swapping their place with the other. But can their love blossom? If you enjoyed the innocent and pure story of the sixth graders in Flipped, below is a perfect little list of some others like it.

Not with the same cup of romance as Flipped, Eight Grade, however, is still one of the best movies for youngsters and their understanding of themselves. The movie emphasizes the mentality and the fear of losing oneself at the threshold of growing age.

The little comedy-filled drama unveils with 13-year-old Kayla. She suffers from social anxiety, yet she advises on her channel about being confident every day. The film spans the last week of Kayla in her middle school as she struggles to cope with the changes in both the environment and emotions.

It is a perfect movie that explains the awkwardness of young love and the problems of an eleven-year-old that seem never-ending. My Girl is among the highest grossers as the most popular movie of the early 1990s.

Vada, an 11-year-old girl, suffers from the after-effects of her mother's death. She doesn't know what to do with her life with a not-so-attentive father and rumors of a freak about her. Her apparently true love for her teacher also seems to break her heart. But the best friend Thomas is surely not letting Vada be taken away by anyone.

Also Recommend: 16 Shows Like The Summer I Turned Pretty

Yet another innocent and refined love story of sixth graders is undoubtedly to make your evening warm and romantic. Little Manhattan simply showcases multiple facts and how they affect the lives of a single person.

The enchanting love story begins with Gabe and Rosemary dating each other. Gabe feels blessed to have Rosemary, but at the same time, he is scared of his parent's divorce. The revelation that Rosemary might leave town brings Gabe into a rush and tries to bind his love. However, the results of this rushing out aren't what he expected. Can he have his life back?

Aside from love, another thing that terribly hinders a child's growing up is bullying. It is something that almost every other child has gone through at least once when growing up. Measure of a Man showcases such a story of one child.

After all these years, Bobby Marks is prone to bullying because it doesn't affect him least. However, it is still severe. His life changes when he takes a part-time job one summer. The job gives him experience and money and prepares him to face the world. He learns how he can fight for himself like a man.

A love triangle between teenagers is bound to keep you at the edge. Additionally, if it is followed by drama, it goes a tad higher on the charts of excitement and engagement. The Man in the Moon is one such drama-filled love story of three teenagers.

Two sisters, Maureen and Dani, have an unbreakable bond. However, it is soon threatened when they both develop an interest in a single boy. They are pushed apart because of the rift. Yet the sisters get to know each other better than before when faced with a tragedy.