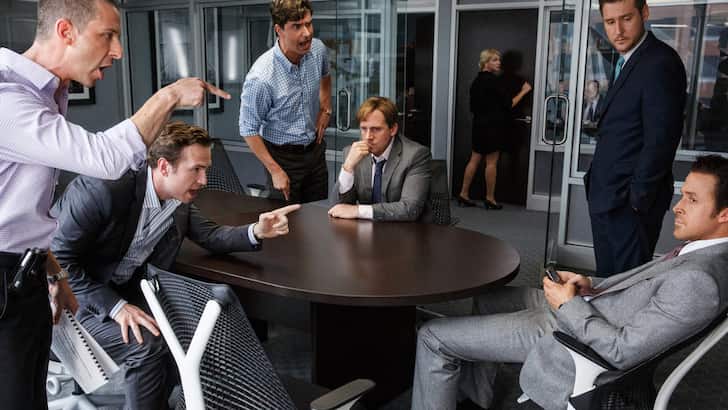 The exceptionally well written and amazingly portrayed biography with a touch of humor and drama won attention of the critic and many others resulting in popularity. It showcases the events that led to financial crises in the USA in a certain year.

The movie twistedly tells the tale of a group of people who bet against the banks with everything they have and much more. Michael Burry leads the undetected money heist with his sharp brain and analytical thinking.

His one move of throwing in money on the losing side attracts the attention of some ravening people. Some recommendations if you enjoyed the informative and thrilling financial movies like The Big Short.

The Wolf of Wall Street is considered a prequel to The Big Short as it ignited the flame of heisting money without any proof. It is based on the real events of the ever-so-famous Jordan Belfort and his journey from a simple employee to an owner of billions in less than years.

The movie starts in the Wall Street brokerage firm. Belfort makes use of his witty mind and hunger for money to make his fortune. He arises as a wolf of the Wall Street who coveted everything he wanted using any means possible.

Also Recommend: 17 Movies Like The Wolf of Wall Street

Where The Big Short focuses on piling up money by betting everything, Margin Call takes a different approach to keep the money safe. The movie zips in a period of 24 hours in a thrilling and intriguing way.

A multinational company is about to face the biggest financial plight. A group of their best minds gather up and hatch a plan to save the company. They would use any means possible as long as it gets the job done.

Following the demographics of The Big Short, Money Monster tells the outcomes when one take the risks of betting every single penny. This one also somewhat caters to the real events where everything is unpredictable.

Gates is a famous guru in Wall Street. His popularity is rising with leaps and bounds. In front of a camera where the whole nation is watching he faces one of his angry customers who lost everything because of his advice. Gates technically handles the frustrated and lost man to keep his reputation up.

Not exactly The Big Short in terms of money handling and committing fraud, Spotlight takes a note of a serious crime and its realization. The movie follows a group of people who try to protect a priest against the accusations of abusing more than dozens of children.

However, a group of passionate reporters stands against them. They will leave no stone unturned to bring justice to light. The devoted lot is determined to find the cause of the grand plan that is unfolding behind the scenes.

The tale of a whistleblower brings in a funny yet thrilling and suspenseful time. The Informant follows the same tracks like the Big Short. However, the former does it in detail of how the information moves.

A young energetic and devoted employee named Mark works in an agricultural organization. His passion and devotion undoubtedly would’ve taken him to the peaks of success. However, when he discovers the dark secrets of his beloved company, he decides to become a spy who works for justice.

More films about finance to watch if you loved The Big Short (2015):