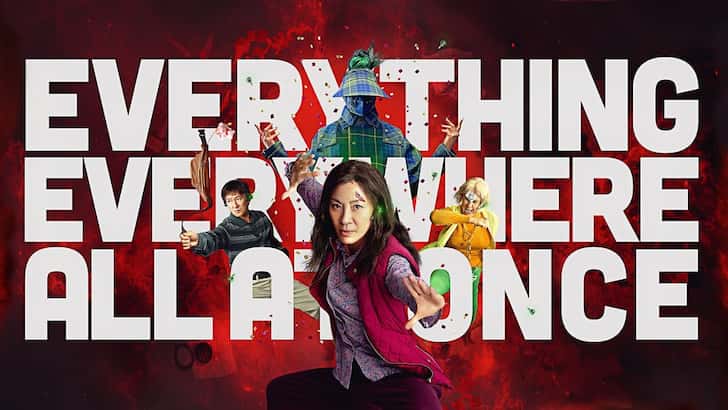 Science Fiction and Fantasy is at its best to outshine all other fictional superhero movies by highlighting a multiverse phenomenon surrounding a regular mother. Mothers are the first heroes, and this time the fate of the universe, including her failing small world of three, lies on her shoulders.

Evelyn, an everyday woman with a grappling life, has her morale high despite all odds. Everything is overrun by the revelation of the multiverse. Their multiverse personalities take over their bodies and create rifts in all linked worlds, resulting in chaos. Evelyn is determined to save her family and world from these invaders with some newly gained powers from her other multiverse selves.

If you like to rack your brains in the multiverse with drama and fiction like Everything Everywhere All At Once, check out the below titles.

Best Movies Similar to Everything Everywhere All at Once (2022):

The Butterfly Effect has a striking resemblance to Everything Everywhere All at Once. The desperation of an individual to save their loved ones at the cost of anything, be it believable or crazy, is the center of both movies.

Evan Treborn may look like a regular college student with a tricky and confusing life. However, his constant headaches allow him to go back to his past. He tirelessly returns to the time he hated the most, only to save his loved ones. Little did he know the basics of time traveling; changing the past changes the future. In his case, the consequences are simply worse.

If only Evelyn were to face all the other variants in their original bodies dropping in her universe personally, it would be a multiverse of madness. Nonetheless, Dr. Strange takes the spotlight with some coherent theories of the multiverse and many questions.

The Superhero finds himself traveling between universes and encounters the same people yet different all along, accompanied by a young girl named America Chavez. His ever-so-unpredictable self becomes the sole threat to the multiverse. However, his determination to save Chavez and the threatened multiverse brings the best of him to light.

With some unique twists and a serious plotline, Tenet takes over the stage from Everything Everywhere All at Once only to showcase a brilliant and nerve-racking time heist at its finest. One thing that gives you the Evelyn vibe is that Mr. Protagonist from Tenet is not a superhero with some unbelievable powers.

A regular and just agent with solid determination and high values is bestowed upon the responsibility to stop the growing seeds of World War III. However, his everyday mission is followed by unexpected time-traveling incidents, which are challenging.

If not superheroes, when will we see some inter-dimensional threats and endangered Earth? With a scoop from Everything Everywhere All at Once, Spider-Man No Way Home is up to bringing the originals from other universes in flesh and body, unlike the former.

After losing admission to his desired university, the ever-so-amazing Peter Parker, aka Spider-Man, seeks magic to solve his problems. Things only get confusing and dangerous when some overly strong people follow the spider-man from their universes into Peter’s. However, with some help around the corner, the friendly neighborhood hero might be able to save the day but at what cost?

Unveiling the puzzling and fictional reality, Edge of Tomorrow follows in the same steps as Everything Everywhere All at Once, only to highlight trans-temporal travel instead of a multiverse. Nonetheless, the thrill, the perplexing instances, and the desperation to save a world at the brink of chaos are undoubtedly the same.

After the alien attack, Maj. cage, the one who shivers from the very name of the battle, is thrown into the ugly, raging, one-sided war. Killed in the blink of an eye, his story repeats countless times until he perfects it with the help of a fellow named Rita. But can his power bring an end to the chaos?

More Films To Watch If You Liked Everything Everywhere All at Once (2022):