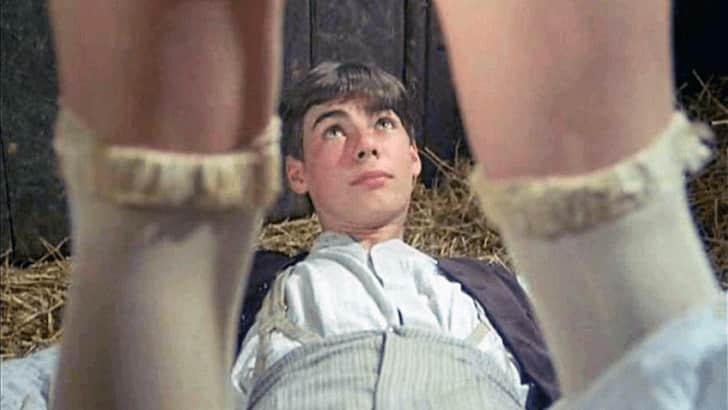 Hats off to Director Mingozzi for bringing the unusual combo of laughter and soft erotica on stage! What Every Frenchwoman Wants is an old movie based on the said genre. Opposite to its title, it displays the curiosity and growing hormonal desires of a teenager named Roger.

His constant efforts to lose his virginity are hilarious, but they only fan the fire. Lady luck takes mercy on him, and with World War I, Roger becomes the king with maidens around in his uncle’s mansion. Finally, he waters his curiosity only to land on a bigger problem.

If you liked the funny yet titillating story of What Every Frenchwoman Wants (aka Exploits of a Young Don Juan, L'iniziazione and Les Exploits d'un Jeune Don Juan), below are some suggestions.

Best Movies Similar to What Every Frenchwoman Wants (1986):

This one has much of a muchness to What Every Frenchwoman Wants. Miranda is a story that portrays the meaning behind the former. Both plots have a missing partner, many lovers, and a comedic touch. This one centers on Miranda, a beautiful young lady waiting patiently for her husband’s return from war.

That is how the world sees her. However, beneath this layer, she is having fun with different lovers, changing with each season. She is determined to find a perfect fit for her, and with a long list of her admirers, that will surely come true soon.

Akin to What Every Frenchwoman Wants, Tender Cousins is a tender love story of two cousins. They are left alone in a big mansion when Adolf Hitler was waging war. Both movies have similarities like war, teenage male leads, and curiosity about making love.

A 14-year-old Julien gets to spend his summer during the war times. Enjoying days with his 16-year-old beautiful cousin Julia, love sparks between them. However, it isn’t just love but the attraction between two opposite genders that leads to many steamy nights.

However, her beauty has made her the target of hatred. The 12-year-old innocent Renato falls for her beauty and his desires arise dramatically. Things don’t end well for disheartened people as the war-ragged world is much harsher than it looks.

Forbidden relationships, older women, and erotica in The Graduate will give you similar vibes as What Every Frenchwoman Wants. There is only one exception with Benjamin, the protagonist being an adult.

His new graduate life takes a strange path when he falls for the seduction of Mrs. Robinson, his aunt. However, things suddenly turn when Benjamin discovers that he has feelings of love towards Elaine. She is the daughter of Mrs. Robinson and the one who will change Benjamin’s life unexpectedly.

Similar to What Every Frenchwoman Wants, All Things Fair is set in war times. This film portrays the fantasy of teenagers having a crush on their teacher. Simultaneously, it also portrays the consequences if such a crush escalates.

The 15-year-old Stig gets to date his 37-year-old biology teacher Viola. Their relationship turns steamy in the blink of an eye. However, breaking the taboo has costs. Things turn dangerous when Viola’s drunken husband discovers their indecent secret.