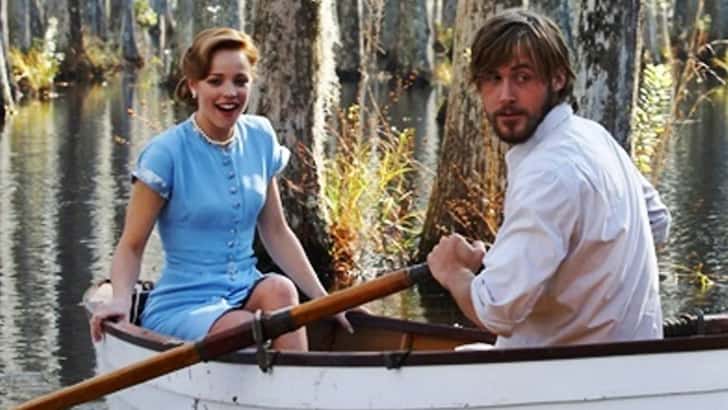 Inspired by a true story, Author Nicholas Sparks enslaved the audiences with his brilliant work. The Notebook is a typical love story between a rich girl Allie and a commoner Noah from the 1940s. It portrays the two's tragic events and emotional reunion with a uniqueness that captures one's heart.

Their love was dissuaded by all, making the two go separate ways for three years. However, when Noah returns from war and a chance reunion occurs with now engaged Allie. Their old love flares up again. With lots of drama and romance, The Notebook will give a little exercise to your tear ducts.

If you enjoy watching emotional and touching romantic movies like Notebook, then the below ones are for you;

The biggest question, "What does it truly mean to love another," was enough to hook the audience in the prologue of the novel by Sparks. Akin to The Notebook, it is a story of a soldier. Still, Nicholas Sparks answers the above question in the most beautiful yet painful way.

John, a soldier, and Savannah, an ambitious college girl, are deeply in love but separated by war. After seven years of separation, they reunite in events where Savannah is married to Tim. John's understanding and exceptional sacrifice make the movie a real deal.

Yet another masterpiece by author Nicholas Sparks turns into an audience's favorite romance story. Like The Notebook, Luke and Sophia, a young and passionate couple in love, have to cross many hurdles to prove their eternal love.

They both are ambitious and want to follow their own path, which creates rifts in their relationship. However, they are both hung up on not leaving the other. Thus, lady luck inspires them from an elderly man named Ira, and things take an unexpected turn.

Sweet November is a romantic film akin to The Notebook, with some heartbreak and romance. The movie focuses on a headstrong and confident girl named Sara and a handsome workaholic Nelson.

Their lives intervene as Nelson agrees to a one-month contractual relationship with Sara. They set a condition that they will leave each other after this November with no strings attached. However, Nelson's heart falls for the lovable Sara neglecting the terms of the contract.

The undying story of Jack and Rose needs no introductions. It is an era-defining movie with romance, thrill, and heartbreak. The love of aristocratic lady Rose and a commoner Jack was hated by all, like Allie and Noah from The Notebook.

Their love encountered the worst fate as it was directed at the Titanic, the ship they boarded. However short it was, Rose kept the essence of her love for Jack alive till her last breath.

A coming-of-age romance between two cancer patients is unheard of. The Fault in Our Stars is a heart-tearing story of Gus and Hazel. It is a movie that won hearts and awards as well.

When Gus and Hazel meet in their chemo ward, the teenagers find similar interests. They decide to travel and meet their admired author. This journey deepens their love, only to leave pain for the rest of eternity.

More Tear-Jerking Romantic Films To Watch If You Loved The Notebook: