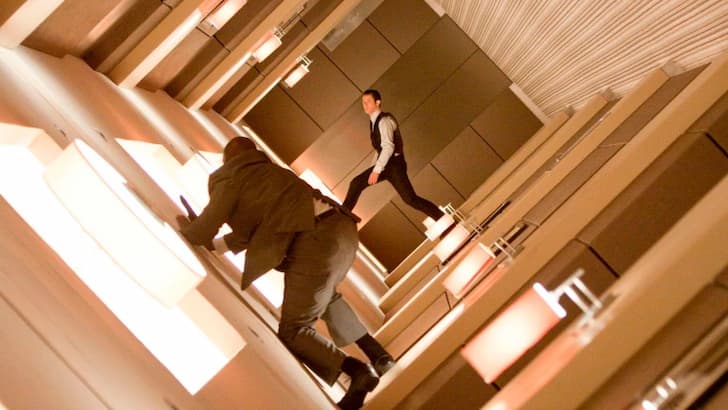 Director Christopher Nolan’s record-breaking and thrilling work, Inception, is science fiction. Pushing ahead with the method of mind reading and using the artistic science of extraction, the director made sure to bring a remarkable masterpiece into play.

A skilled thief named Dom made his name by doing the impossible. Using his ability to enter the mind and extract secrets from people under sleep. He becomes an international escapee thanks to his abilities. To get his life back, lady luck offers him a chance of vindication.

However, this road is more challenging than he thought. With his team, he jumps into the world of Inception to reclaim himself. If you are looking for some nerve-racking sci-fi movies, then below are recommendations for you.

Tenet follows the same plotline as Inception. With a bewildering and entangling story, Tenet premises a dangerous mission of The Protagonist, played by John David. The task is to stop World War III from happening.

John David’s simple world of a spy turns into fantasy when he learns about weapons from the future. Jumping from time to time, the Protagonist, accompanied by Neil, a British spy, enters the vortex with a single word as his weapon, Tenet.

Timecrimes has been crowned as one of the most nerve-wracking and confusing crime thrillers. It is an intriguing mystery centering time travel. This movie keeps the audience imprisoned in chills and thrills.

After moving to a new house with his wife, Hector, a middle-aged man, ends up traveling back in time. However, to return back, he must not come in contact with himself from the current timeline. Things get exciting as Hector gets trapped in a loop trying to find a way out.

Akin to Inception, Coherence is also a mind-boggling sci-fi mystery and thriller. Eight friends gather to enjoy a reunion one night. Emily joins with her boyfriend Kevin, but the latter’s ex bothers Emily.

A regular party night becomes a mess of multiple timelines intervening with each other as a comet passes by. Following some eerie events, the eight friends from different timelines struggle to maintain theirs. However, Emily, a variable from one timeline, ends up directing things on a different path.

Talking about the confusing yet thrilling movies, Predestination sure has a special place. The story is heavily based on time travel, followed by action and mystery. A time-traveling agent played by Ethan Hawke works for a time traveling crime controlling agency.

After a dreadful incident, he undergoes surgery to get a new face. He goes on his last mission only to find himself in a loop to find the one man responsible for this injury. With his quirks and intelligence, he is determined to find a way back, but it isn’t that simple.

A spy movie full of action and a confusing dream, Total Recall is another epic sci-fi that takes you on a bumper-cart ride of many experiences. A regular factory worker named Douglas has unsettling dreams. To find peace, he dares to try a dream sequence of a spy.

However, this stunt triggers the sealed secret within him, and his actual spy self surfaces. With his life flipped, Douglas encounters the girl from his dreams thinking she might be his key to salvation.

If you enjoy racking your brain and indulging yourself in films like Inception, then you will enjoy these: