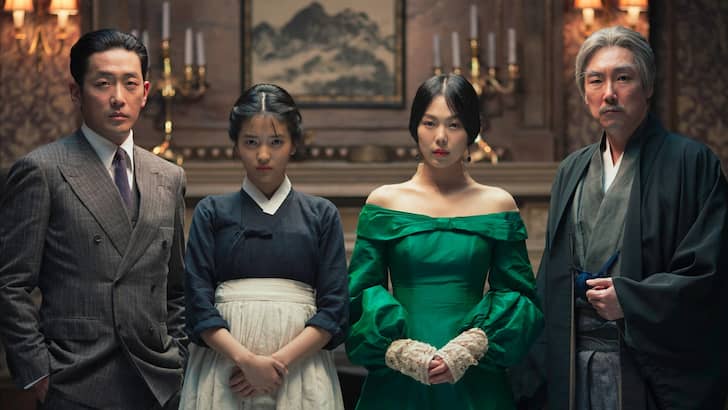 Set in historical times, The Handmaiden is Korea’s one of the most popular thriller and mystery films. The hidden desires of each character and the dormant personalities of the main characters have been portrayed in the best way possible.

The Handmaiden is the story of Sook-Hee, a young Korean girl lured in by a plotting man to deceive a Japanese lady named Hideko. What started as a fraud plan for Sook-Hee led her to realize her true self. The truth she never knew about herself starts arising when she is seduced by Hideko’s attempts. Things take an unexpected turn with many mysteries unfolding and mind games in play.

If you enjoyed the psychological thrills and like the dark mysteries of The Handmaiden, then below are some similar picks for you;

Best Movies Similar to The Handmaiden (2016):

Similar to The Handmaiden, My Cousin Rachel is also a mystery and thriller with a lot of romance. The plot centers on the mysterious and bewitching beauty of Rachel and a young charming man Philip.

The death of Philip’s stepbrother leads to suspect Rachel, his widow. Philip decides to take revenge on Rachel. However, his plans flip when he witnesses the divine beauty of Rachel. Unbeknownst to him, this bewitching beauty hides a plotting mind.

Akin to The Handmaiden, The Housemaid is a similar story of betrayal and revenge. The plot centers on Eun Yi, a poor and innocent woman who falls for the charms and seduction of her boss.

After Eun Yi is impregnated and the truth of her affair arises, Hae Ra, the lady of the house, decides to torture Eun Yi. Her attempts to kill Eun Yi’s baby lead her to darker paths. Betrayed by her lover, EunYi decides to exact revenge on the hideous family.

Black Kiss is a crime and psychological thriller following the same plot line as The Handmaiden. The dark and thrilling story unfolds when a young aspiring model named Asuka begins her modeling career. A hideous murder occurs in the alley next to Asuka’s residence.

The gore and bloodbath at the scene triggered fear among people. However, it was the start of a psycho on a killing spree in Asuka’s surroundings. What makes this sinister is that the killer always leaves a black kiss mark near the mutilated bodies.

Goth is a movie that follows The Handmaiden’s plot but a bit strictly. It focuses on an enchanting beauty named Goth and her devious lifestyle.

The story unfolds when Goth manipulates two innocent teenagers named Chrissy and Boone and leads them to a darker path. Bewitched by her beauty, the duo falls deeper into the world of drugs, violence, and gory murderers.

Following The Handmaiden, Lady Vengeance is a crime thriller led by mystery. It focuses on Lee Geum Ja, the innocent one and her revenge plot. Geum Jaa was accused of a murder she didn’t know of.

Spending 15 years in jail has made her a hostile human. She plots revenge against her perpetrators. With the help of her crazy friends from prison, she starts her journey that is filled with blood and killing.

If you enjoyed the mystery of The Handmaiden, then below are some similar suggestions for you: