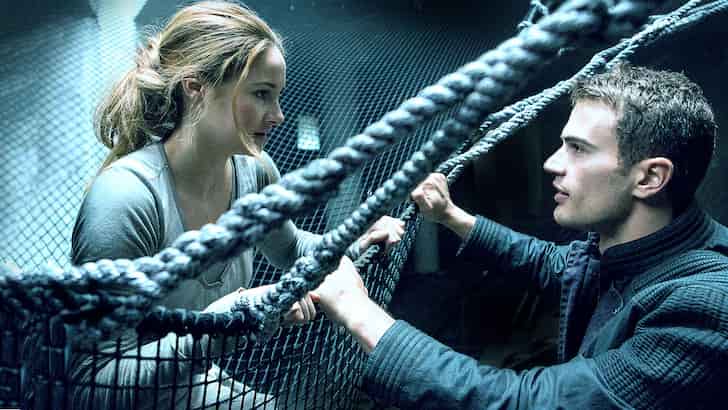 Based on the debut novel of Veronica Roth, Divergent is a popular sci-fi thriller followed by mystery. The Divergent series is set in a futuristic dystopian world. Where people are divided and are treated as per their respective factions.

The film centers around a girl named Tris and her adventures when she opts for the "Dauntless" faction. To find her true self, she jumps into the whirlpool of factions only to discover that she is much more than just a Dauntless, a Divergent.

If you loved watching this action and thriller, you would enjoy the below, similar to Divergent only with a twist.

Akin to Divergent, The Hunger Game is also set in a futuristic dystopian world. The only difference is that there are 12 districts here instead of 5 factions. It is another action thriller that became famous as soon as it hit the floors.

The story focuses a poor girl Katniss with good hunting skills. To protect her sister from becoming a tribute, she makes the sacrifice. Little did she know that she would become a ray of hope for everyone! And thus, her trials begin.

The previous decade had the trend of bringing a dystopian world with a touch of fantasy in action. Following Divergent storyline, The Maze Runner also portrays such a world.

The thrill begins when Thomas, a teenager, opens his eyes to a giant maze in front of him. Having no idea of who he is and why he is here, he is only left with one option; Cross the maze. However, it isn't just a maze but a constantly changing one that engulfs many without a trace.

This one is similar yet different from Divergent. In Time is a movie set in a fictional world with a basic notion; Time is money. Literally, people live only as per the minutes of life they have. The rich can buy limitless, and the poor only wish for more minutes.

Will is a regular person with only a day or two worth of life. His mundane life flips when he receives Time of a century. Being eyed by many high officials, he finds himself in a never-ending plot of murder and whatnot.

Ender's Game and Divergent are very alike. Both are set in a futuristic fictional world. And both have one character destined for greatness.

This fictional story chronicles the adventures of Ender Wiggin. He is an exceptional genius with a kind heart. Ender is tasked to fight against an alien army threatening the world's fate. However, it requires Ender to sacrifice more than he thought.

The 5th Wave has thrills and vibes akin to Divergent. It has a very typical plot where aliens attack the earth. Nonetheless, the characters and the action sequences make it a worthy watch.

The 5th Wave of aliens is about to attack an almost extinct human race. A regular teenager named Cassie has only one goal to find her lost brother Sam and save him. Her quest begins as she struggles against the powerful aliens.

More Films To Watch If You Loved Divergent (Series):