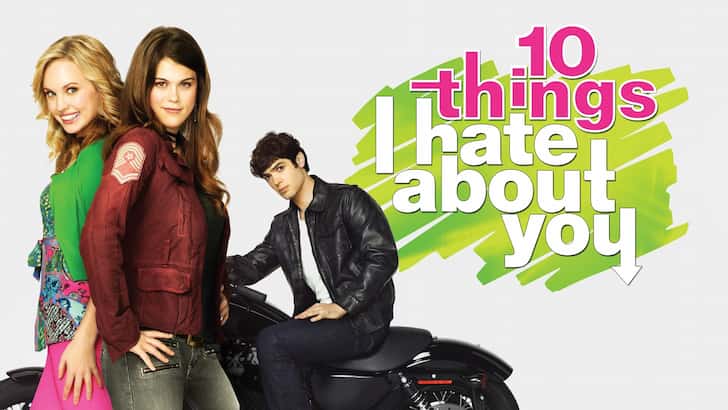 Teenage love always gets the attention no matter the era. 10 Things I Hate About You is one such teenage romance comedy that covers the love and relationships of high schoolers. The plot mainly focuses on Katarina, the elder sister of Bianca and an aloof girl who doesn't have a boyfriend.

Patrick is the male protagonist who is bribed by Cameron to make Katarina fall in love with him. What started as a game for Patrick becomes a life turning event when Katarina opens her wounded heart. But things turn sour as Patrick's secret surfaces.

10 Things I Hate About You is Katarina's poem for Patrick with all the puzzled feelings. But will they ever know each other's hearts? Here are a few similar suggestions for you;

Pretty in Pink is a teen romance movie with a love triangle. This already makes it spicy. However, the characters and their essence bring the film to life. A dull girl Andie has a tough life where everyone ignores her existence.

Only her childhood friend Duckie and her workplace owner know her. When the school's rich and handsome eye-candy Blane falls for her, things become complicated. However, it is just the beginning.

A Walk to Remember is a movie that resembles 10 Things I Hate About You in the best way. The only thing is that it has an end that leaves a bitter aftertaste. Jammie is the lonesome girl but truly a gem. Landon is the school’s wealthy playboy who everyone desires.

Lady luck bestows a chance on Landon. He falls head over heels for the plain Jammie and goes legit. However, the story turns heartbreaking as Landon discovers Jammie's truth.

This one is a fairytale that became an instant hit as it targeted the fantasies of teenagers. Teen love, ignored and unrefined female lead is akin to 10 Things I Hate About You. Mia is an ordinary school girl that goes unnoticed everywhere but is still content.

Her life flips when one day Queen Clarisse of Genovia appears claiming Mia as her granddaughter and her heir apparent. Mia learns to accept the truth and transforms into Princess Mia Thermopolis.

With much of a muchness with 10 Things I Hate About You, this one is considered a spinoff of the original Cinderella's fairytale. Sam became a maid in her own house when her father died, leaving her penniless.

In her harsh life, her email buddy was the only charm. She is shocked to find that he is none other than Austin. Her insecurities surface as she desperately tries to hide away from the school's rich and handsome prince. Even so, that is only the beginning of the Cinderella story.

Another teen love story from 1999 made everyone fall in love and expect such love in their lives. The school's handsome boy Zach is on the brink of losing his popular place as his girlfriend dumps him.

He takes up the challenge to restore his manly honor. Zach decides to turn the school's most boring, lonesome, and unrefined girl into the next prom queen. However, unexpectedly he discovers what people call love in the dull girl Laney.