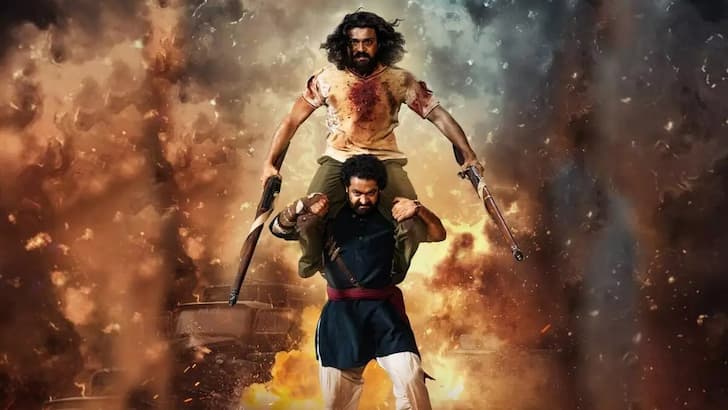 RRR - S.S Rajamouli's one of the biggest ever grossing movies that made the Indian cinema roar. The movie was bound to be a hit with the epic, star-studded cast. Still, the plot, visuals and the ups and downs in the friendship of the two best friends made it an otherworldly experience.

Set in the historic period RRR is an emotional and struggling story of two insurgents bound by fate. Raju, the Indian police official under British rule, and Bheem, a local villager, become best friends after a fateful event. However, soon they face each other as the nemesis.

Both are sincere in their heart and loyal to what they believe is their duty. Their trials begin as they go against their hearts. If you love watching the historic RRR by SS Rajamouli, then you will love the below ones;

Baahubali is the Indian movie that made Telugu cinema known worldwide for its epic plot and exceptional performances. Rajamoulis' Baahubali series is a trendsetter and a legendary historical movie with romance, action, fantasy, and aesthetics.

It is a fictional story that chronicles the journey of Prince Amarendra and the legacy he left behind carried out by his son Mahendra. Both live for their values and morals, fighting against the jealousy and envy of a single man.

Stream it on: Netflix, Hotstar and Sony Liv

Eega is another super hit film by S.S. Rajamouli. He is famous for bringing quirky ideas and fantasies into action, leaving everyone in awe. Eega is such a love and revenge story. A man named Nani falls head over heels for a cute girl Bindu.

However, before their love begins, he becomes a subject to Sudeep's jealousy. Sudeep is a billionaire who eyed Bindu and wanted to have her. Nani reincarnates to protect his love and take revenge on Sudeep, but with a twist. He is reborn as an Eega, aka the Fly.

Indian cinema has brought some epic movies on the floor that made history. Lagaan is one of the era-defining movies that envelop many genres like sports, love, war, drama, and politics. The plot is set in the late 1800s, depicting the time of British rule.

Bhuvan, a local farmer, becomes the ray of hope for villagers as he stands against a British Captain. Their rift turns into a bet where to come as victors Buhvan and villagers have to play and win a game they never imagined; Cricket.

Stream it on: Netflix

Indian cinema is versatile, and like RRR, they have a knack for historical movies. Bajirao Mastani is another record-breaking love story from the 1700s. The plot premises Bajirao, played by Ranvir Singh, and a warrior princess named Mastani, played by Deepika.

In every era love of two individuals from two different classes is dissuaded. Akin to that, Peshwa Bajirao, the known warrior, albeit being married to Kashibhai (Priyanka), falls in love with Mastani. Their love is surely eternal, but it took them everything to prove it.

Like RRR, Enthiran is a blockbuster futuristic movie with a star-studded cast. The Tamil cinema brought its versatility to light and left everyone in awe. Enthiran focuses on a scientist and his newly created AI Robot named Chitti, played by Rajnikanth.

His intentions and will to help mankind by making Chitti was blocked when a particular incident occurred. After being exposed to human emotions, Chitti's dark side, influenced by negative emotions, surfaces, and the thrill begins.

Stream on: Sun Nxt and Zee5

This is the most popular movie from Kannada industry that knows how to keep the audience hooked. Just like RRR, KGF is a fictional movie set in historic times. The plot focuses on the life journey of an orphan named Rocky, a villainous hero.

KGF entails Rocky's sad and harsh life as a child. It leads to his transitions from a weak lad to the strongest, the King of the underworld. Rocky goes through many trials and ends up helping people. These acts made him to be known by various names as a king, gangster and a savior.

Also check out these other must watch movies from Indian film industry: